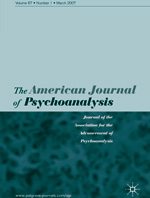 Wu, J.H. (1996). From mother to daughter: Models of success, femininity and power in the marketplace and the village In (Tiessen, R. Ed.) Human Rights and Women’s Realities: Reflections on Beijing and Beyond: Guelph: World University Service of Canada.

Fear of success in women may be manifested through underachievement or repetitious nonattainment of self-defined goals… A reveral of value had taken place developmentally insofar as the self was valued and defined by its suffering, a value established via identification with a devalued and unhappy parent. This reveral of success and failure may be manifested as repetitive failure in tasks attempted but not achieved, in self-devaluation with the view of self as inadequate, unworthy, inferior, or as an “imposter” (Clance and O’Toole, 1986), causing the woman to retreat from ambition or to pay for success with guilt, anxiety, and unhappiness (Person, 1982; Kanefield, 1985b; Schafer, 1984; Nadelson, Notman, and Bennet, 1978)… Such a child learns to ward off threat by keeping a low profile

This discussion refers to the salient features of Confucian-based cultures… Confucianism is a philosophy and an ethic that involves intricately structured relationships among individuals and that dictates in detail the behavior within those relationships (Ho, 1987). Of particular concern are family relationships, where a complex web of hierarchy encompasses the extended family, based on the dual principles of age and gender. Devotion, gratitude, and obedience are lifelong requirements of children to their parents.

The understanding and treatment of fear of success derived from conflicts of individuation, attachment, and achievement have been demonstrated to be complex and multifaceted… At one level it is a problem of the psychology of women, for whom conditions of powerlessness and debasement have been historically linked to social existence in many cultures (Benjamin, 1988; de Beauvoir, 1968)… From the perspective of psychotherapists whose wares and craft of healing are principally in the realm of microanalysis of intrapsychic processes, it is nonetheless useful at times to switch the lens of focus to broader perspectives. In the analysis of achievement and attachment conflicts in Asian women, those lenses may beneficially swing to the perspectives of culture and the psychology of women.